Need to get the “cam wire” figured out, but I managed to figure out how to set the shoulder back on a case using this infernal whirling contraption, and measure it with my headspace comparator gauge-thing!
Sorta. That is I cheated and compared it to an actual round, and then made adjustments screwing the die-down until it matched, which is a way of overcoming my near complete math illiteracy.
So now it goes up and down and around and around – albeit somewhat jerkily as any Steampunk device ought-to, and Piggyback is an appropriate name, but you could call it Hunchback too, from the condition I’ll develop, bending over and fiddling with it…
It’s bit of a kludge, like RCBS never threw anything away, they just rearranged the configurations. It’s one presssitting on top of another, the rams are joined by a link that fits like a male-female case-holder.
UPDATE: Hold on, let me reorient this:
Here’s the new superstructure mounted atop the old RS-3 press. It’s semi-manual, so you pop-in a case and then another and then another and it rotates and goes up and down and when one comes around finallly for a bullet you place the bullet on top and press it up, meanwhile another case is being de-primed and another is being primed, and one is loaded with powder, etc.
The Upside is the shell-plates are the same as the Pro200 and now I have a bunch.
Downside is the arbor height and ram-stroke only accommodates cartridges 2.260″ tall so .30-06/.308 etc. is out – it’s .223 and pistols for me with this baby (and the v.3 is a shorty also). :

And this is the bottom half. 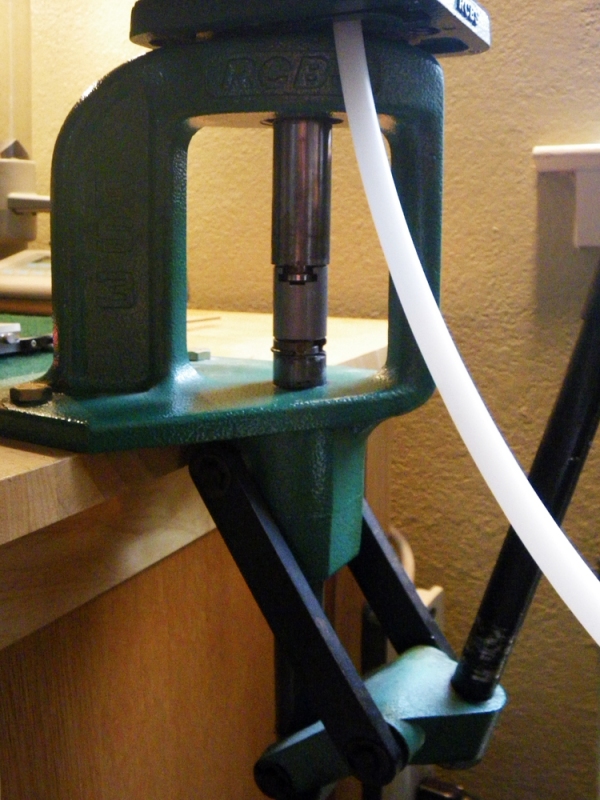 And it’s held together and operated by this ram connector.
Fully functional and a good idea, engineeringwise…but it’s definitely not super-smooth in operation though that effect can’t be attributed to this link, it’s just an overall design issue. 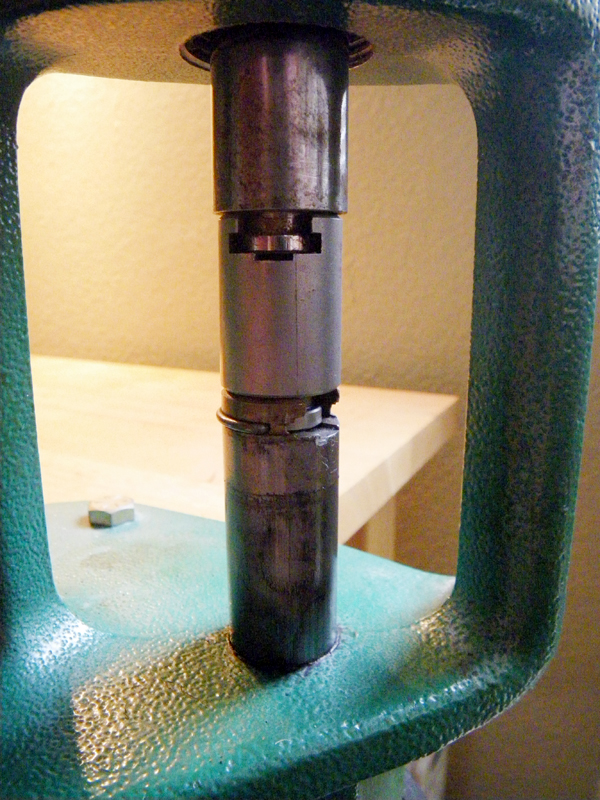 The term Steampunk fits I think? There should be a whistle attached somewhere and a bevel-drive gizmo-something running off the side, and sections wrapped in crocodile skin.
The top die-head is shared with the earlier RCBS progressive press, the “Ammomaster”, and it is changeable but not that easily – it would be a bit like removing your tires to change the transmission, or visa versa… 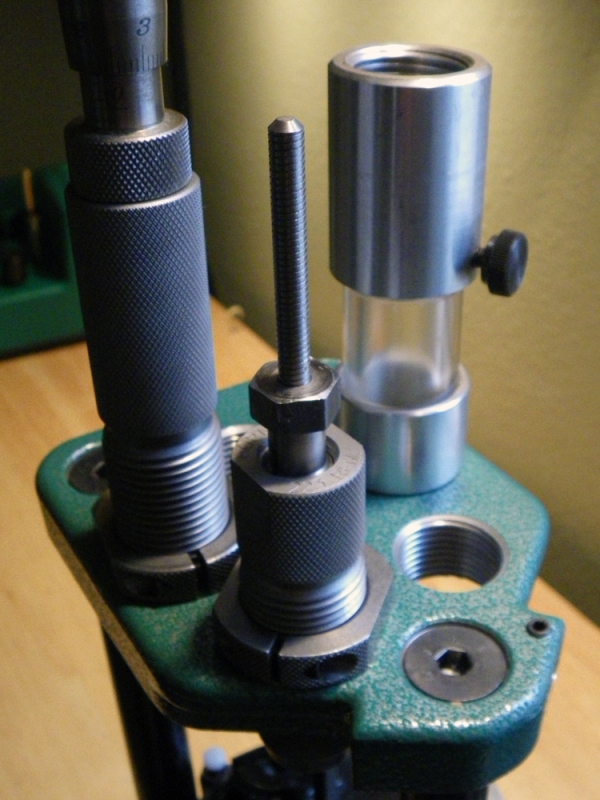 I don’t have a powder measure rigged-up and have to buy one, so I don’t know if it throws everything onto the floor…

Meanwhile I’m looking for primer tubes and a powder measure…

Just to illustrate an old post, here’s the Lee cutter mated to a case-length stop and affixed to position #1 on my RCBS Trim Mate. After de-priming and re-sizing in the press, the brass can be directly inserted over the gauge and trimmed to length. Voila. 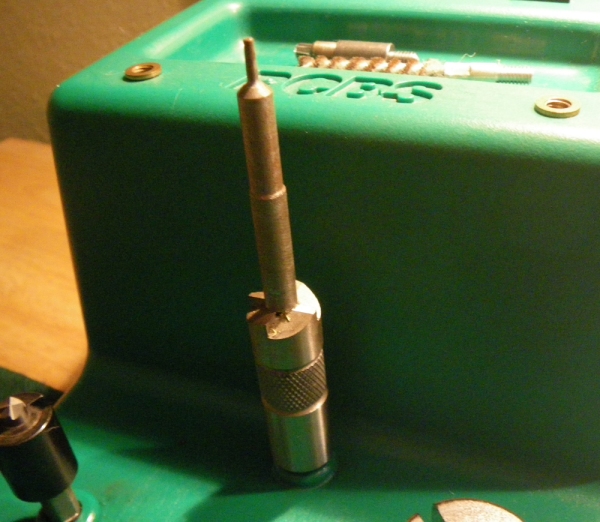 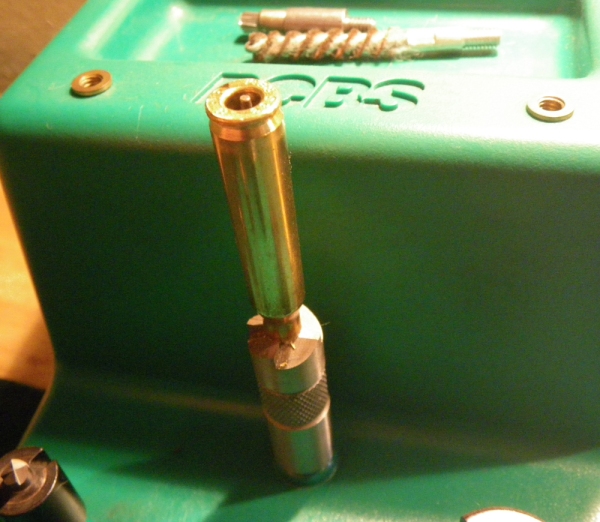 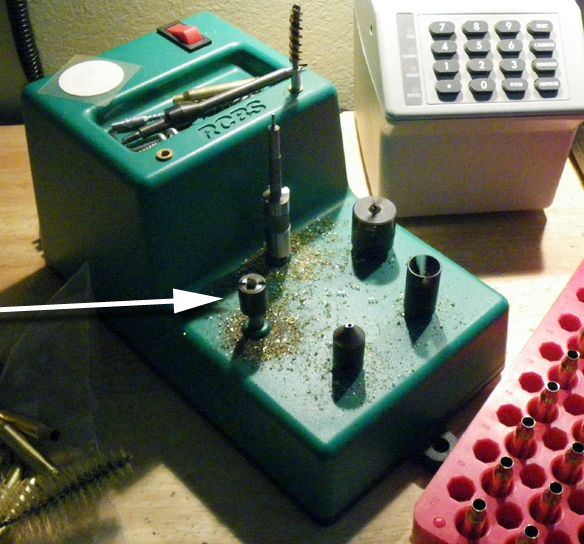 Among the things I got with the press when I set-up the reloading bench was this. I have no idea what or how it operates, I don’t believe it’s for a rifle cartridge and the green box has no label or indicator.

I arranged it in a couple different ways.

The spring loaded whatchamajigger can pass through the center unless you snap in the shell-holder or anvil or whatever it is.

It could be some kind of…crimp-remover?

I’m needing a clue here. The threads allow it to go in topsides, and the shell-holder notch will accept whatever shell-holder so the brass would hang upsidown? Then you can put the anvil on the ram…for what? Must be some kind of goofy hand-gun thing. 😉
UPDATE: I’m a dumbass but I think I got it figured out (finally).

I’m prepping for a match this weekend and full-length re-sizing twice-shot cases. To check them I have a Stony Point Cartridge Headspace Gauge. This works with or without the bullets seated, since the .30-06 case headspaces on the shoulder that’s what needs to be measured. The shoulders line right up at the same mark each time, with shot cases running short. Re-sizing to full length gets the shoulder back up where it belongs, but then the case is measuring out to 2.502+/- when it should be 2.494 so I have to trim the brass a smidge.

I’m going to use the load that worked so well for me before, the 150-grain spirepoints (center), with 46 grains of H4895.
The Square Green Thing: I got bored smearing on the Imperial Re-Sizing Wax and simultaneously was about to throw out the old case-lube pad when I noticed it was damp with soaked-in lube. In the past I had dinged up every case-neck I tried with an overdose of spray-on lube, but I thought maybe now my finesse had improved so I decided to give it another go.
It’s working better than before, possibly due to the dies now being burnished and broken-in they’re less dry and grabby, and also I’m just rolling the cases back and forth a couple time across the pad surface, instead of deluging them in spray-lube. Laziness of finesse, or whatever.

Ok so this can be like watching paint dry…it’s not runway models after all.

These gleaming copper-clad little beauties are 168-grain Nosler Custom Competitions wrapped in a runway sheath of Lake City ’66 brass under which I’m gonna light a fire with 46.5 grains of slinky-chopped H4895 using a bold Remington Number 9‎½ Large Rifle primer. Oh-La-La!
A little research lead me to this load, it’s supposed to accurate.