Relaxing with a chilled Italian Peroni to the not-so-relaxing Isle of Man on-bike camera footage.
Simply incredible moto-mayhem.
The uttter speed, the lean-angles, the closeness of the spectators, the potential for glory, the potential for catastrophe.

A month ago it seemed we were in the middle of Summer already, but after a few last-minute Winter storms that our proximity to the high Sierras engenders – where anything can happen weather-wise – we’re in a bit of a cool and calm spot between cloudbursts and lightning.
Spent yesterday messing with the phone. It’s an older 3G Sony-Ericsson with a dollop of extra RAM that held a bunch of old-old numbers on the SIM card. I attempted (and finally found) a way to look and catalog them through the ‘puter – and deleted a bunch from Die Alte Bayaryanlandeschaft. Not really interested in the new phone stuff -don’t need or have use for a handheld pocket-pal companion everywhere.
I’m not really much of a phone-caller anyhow, anymore. Prolific communication by that means has not been significant since High School when a 30-foot cord engendered long and private conversations on the basement steps of my parent’s hear-everything home.
Moving forward we’re signing on Monday morning and close of escrow for “The Ranch” is on Tuesday – which needs some telephony and interwebbery to marginally sustain life, not just the monster Sansui receiver and Klipsch porkys. We’re up another couple hundred feet at 1600’ but not on a hilltop, and the view is of pastureland instead of airplanes and rooftops. Still the skyscapes should be worthwhile and it should be generally quieter instead of hearing the roar of traffic below. Sound travels UP, and at the top you get a lot more than what you’d maybe expect.
It needs a new shed for the 42″ mower, to replace the ugly plastic thing that eroding and collapsing under the harsh Western Slope UV’s as we speak and watch. And there’s a list of physical chores as noted on the inspection report: lag-bolts for the ledgerboard that the sparkling new decking is attached-to, not just screws/. So I’ll be crawling and tunneling like in Stalag 17, underneath the Trex with my DeWalt drill and impact driver. Arrgh! Hot-dipped zinc-coated galvanized, stainless steel lags! Arrgh! Maybe some of these LedgerLOKs? Need an appropriately sized black impact socket. And there’s an outlet that needs its polarity reversed, and…
But it’s a sunny and cool and clear Sunday, and the rains have left things sparkling. Hangtown was yesterday down the hill, but I just couldn’t brave the crowds to be a part of that mix-up. More of an Enduro kinda guy anyhow, if any of that remains. Would like to meet some new ridin’ buddies, the old gang are far away and all fixated on that narrow ribbon asphalt with oncoming vehicles and a stripe down the middle. Hey, there’s a lot more potential for fun: whoops and jumps and soft meadows to crash-in – so many-more places where there’s NOT road – the woods and trees await!

On a beautiful fall day when the birds are chirping and the squirrels frolicking insanely in the pine-tree, I’m inside nursing a sprained foot that I re-injured, collecting digital bits and bytes – materials of my portfolio, from years ago when I cartooned a bit for CityBike. This one had to do with the return of Freddie Spencer and the issue of riding a Ducati vs. his weight… 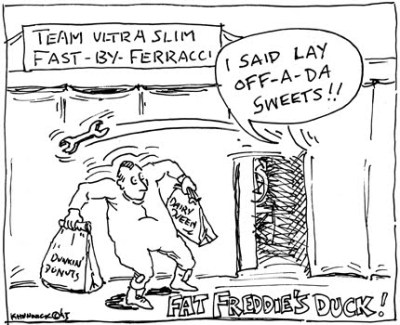 UPDATE: That (above) was when Fast Freddie went to Superbike, after the diesels (4-strokes) took over Formula One. Before that, during the recession of ’93 he was on a French Yamaha 500cc two-stroke with the semi-big-bang motor, and I was on the other side of the tape with a Media Pass and a long lens, thirty-feet from the track’s edge. It was a time of great personal delight.
During practice I saw a bike come screaming into Turn #5 at Laguna. For the race (and from my Reg Pridmore class a few months prior) I remember #5 was configured as an intentionally confusing kind of nasty combination of three-apex left-hand corner with a couple dips, and a rise on exit that all played havoc with suspension and traction — but was easy to get into from a photographer’s POV, and had the potential to produced some great high-side crash-footage. A couple guys had already gone down within the hour, but in unspectacular low-sides when their suspension and traction came to odds with their braking-point.
And here comes a guy on a shabby looking nondescript blue-gray bike, well above the speeds seen earlier, practically sideways going IN and as out-of-shape as any guy who was just about to toss it away – and suddenly somehow through a series of twitchy miracles and judicious application of throttle, he snapped it through the dips, rises and apex on a completely different “line” than any rider previous, and was gone up the hill to #6… And I had to look in my book for the number: Freddie Spencer…And he was my hero after that.
I waited until he came around again and got a pretty ok shot. 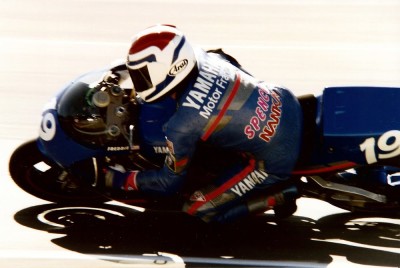 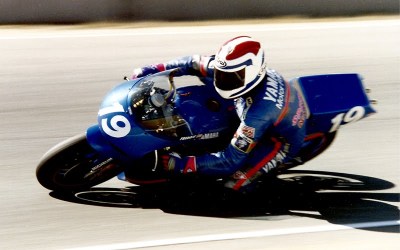