I’ve really been wanting to jump on this rifle, but things keep piling up in other areas and sucking away effort and attention. Still the 1972 Interarms Czech Mauser deserves notice, especially since I just bought a Cabelas .243 scope for it apparently or supposedly from the same region.
I’ve read where the fine old Weaver K4 60-B that it currently sports is a dandy and a legend in its time – but also where everyone who owned one older than “a few years” had to be extremely careful and watch-out for condensation and fogging.
So as not to make the local deer (over)population too comfortable, and also to help ensure my hunt is not distilled into layers of disappointment, when I came across the caliber-designated modern scopes I thought “Wow!” – there really is a better way to go. And the (supposed) fact (noted in comments and in answers at the Cabela’s website) indicated the scopes were made by Meopta kinda sealed the deal. So I hope that remains true.
But I want to get detailed and intriguing photos out – and that’s where I’m stymied and backed-up with other chores and a gone-to-hell camera. Age in technology gets ugly.
More Upcoming…
UPDATE: So…with a bit of care and caution, and using my Gun-smithing screwdrivers, I removed the old Weaver scope. First loosening the tight-as-hell little screws (age has a way odff doign that, or Bubba-Mongo the ‘Smith), then the bigger ones with tip-off mounts – and attempted to install the new Cabela’s scope.
No go. What’s up?
There’s not enough room for the forward bell housing to clear the bases. Studying the situation I noticed that the Weaver-base lock-knotch (or whatever you call it in pre-Picatinny times) was offset forward. Brain! So I un-screwed the base (carefully) and flipped it around to allow set-back, cleaned the base-screws of years of crud, and applied a tiny dab of Blue Loctitite and fastened the front back-down again.
Voila! Clearance! Carefully getting the Weaver tops back on without scratching the anodizing, and using a level to get the cross-hairs square and flat, I proceeded in the backwards direction of re-installation. I don’t have a millimeter-gram torque wrench for scopes, so I didn’t crank down gorilla-style on the screws holding the scope. I figure they’re like axle pinch-bolts, firm-enough should be enough. Don’t want to bend and warp the tube or strip the nuts.
Phew! Looks sweet! 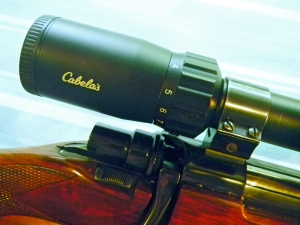