The Dry Creek Project has produced a crossing that verily is stout and capable of withstanding a Panzer attack, but it’s not beautiful by much means. 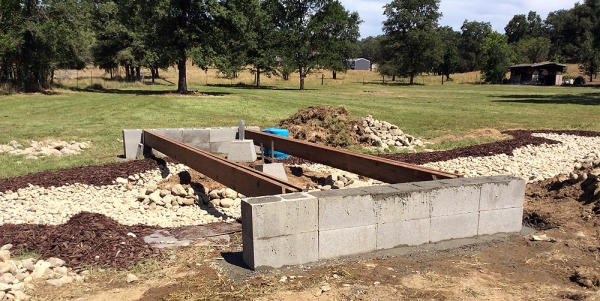 Maybe a couple of strategically placed boulders will offset the pedestrian aspect and create a counterpoint — but still there are no handrails or things of that nature so a drunker lawnmower-driver might plunge awkwardly to an ignominious plight.

However the main point of the project was to manage and improve drainage, and that has yet to be tested…

Got some guys to help out with the shallow entrenching. The cute little Kubota tractor is no match for the soft ground and mud however and we are using shovels. Then rocks and a bridge…

Turns out the 8-inch pipe that runs underneath the field, from the overflow catch-basin on one side to the fence where my neighbor’s cattle water, has perforations. That would explain the standing water when it’s really wet in the fall-winter-spring, but conceivably should also help the drainage. 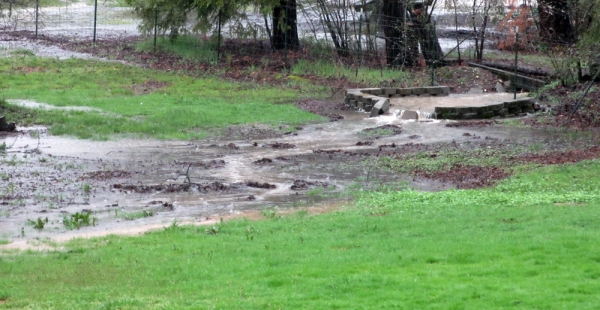 UPDATE: Two inches at 5:00 o’clock. 1.54 inches of rain since midnight, over two and a half since yesterday – the dam has been breached and my cup runneth over, and more is coming down as we speak (1:00PM).
SUNDAY UPDATE: After just .23-inches rain in February, so-far we’re at 9.65-inches just for March – and with more snow in the High Country we’re catching up to “normal.”

Today the nearly month long dalliance with Summer-in-Winter that we’ve been enjoying got frosty. The Pacific high pressure zone parked overhead got nudged aside a bit, as an arctic blast swung down from Alaska to dust the Sierras with snow and the Western Slope with cold air.
At the Army-Navy surplus store I got a Carhartt furry-lined vest to stay warm while working outside — not that I am very inclined to work outside much when it is bitter cold, but sometimes these things can’t be avoided so it’s best to accommodate them in some degree of comfort.

Yesterday the weather was fine and digging went well, and as a means of avoiding the black mud sticking to the dumper-wagon I put down a layer of pine-needles in the bottom. 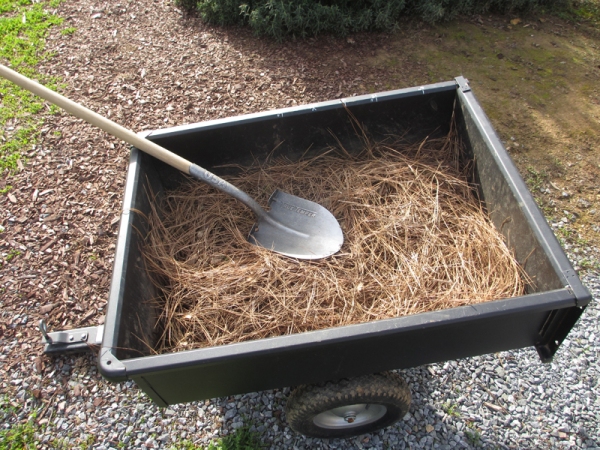 It worked! The loads slid out of the wagon easily, and I made four runs until I got the John Deere’s tires all loaded-up with muck and stuck under the pine tree. After a bit of digging out I got free and decided to call it a day and go hose the machine off. My back was also not too stressed and only required one ibuprofen. 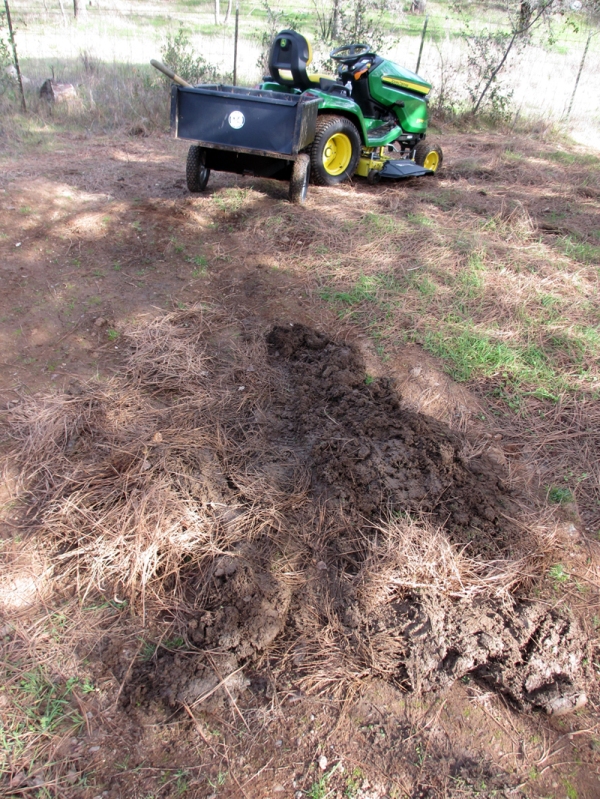 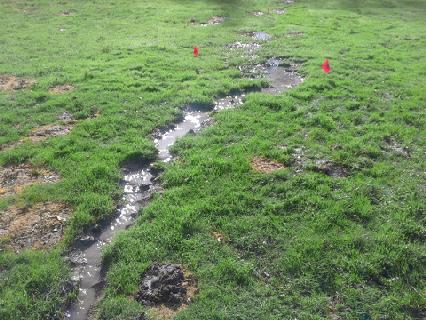 Turns out it was a buried irrigation line, not electric. So I started pulling it up in one direction, then the other. It’s empty and just gurgles. Don’t know where it could possibly have been feeding-from, but I got about twenty-feet pulled-up before I decided not to risk my back further and turned my attention to the swamp and began to cut watery turf. Just me and my shovel.
After about an hour and a couple bottles of water, I had nearly doubled the size of the mud-pit and banked-up turf in various low-spots, as well as filling-in about half of the rocky brown-patch.
There’s a couple dumper-wagon loads of mud to take up and fill-in the old burn-pile ditch, but with this fine weather it’s hard not to just keep at it making hay while the sun shines.
It’s fun to see progress being made, bit by bit, but now I’d better throw a couple mosquito “dunks” into that mess where there’s standing water…

Started-in on the main rocky patch off crap-dirt where not much grows. In the summer when the rest of the grass is a foot high, this ten-foot square area is just a bumpy, scrubby, dust-bowl and the mower kicks-up rocks and dulls the blade. Kicking up rocks around here can also spark a fire, so leveling it out is another safety precaution.
There’s another similar-sized patch off to the left, but this one is close to the drainage cut I’m making, and anyhow there’s always more work to be done if you look for it!

I wish there was a contraption I could pull behind the mower that would gather up rocks and gravel while leaving the nice soil behind, but I’m not aware of such a thing – even for a big tractor. If there was it might justify buying a tractor to do this job, but since there is not it’s just me and the shovel. When I finished with the shovel I spread a lawn-patch mixture of seed and fertilizer on it, in case I don’t get around to filling it with turf cut out of the drainage channel.

Up in the corner of the property, underneath the old pine tree and by the fence, is a kind of junk ditch that may have been the old burn pile. Anyhow that’s where the rocky crap-soil is destined. The small mower couldn’t make it up the hill because of the clearance, the slippery pine needles, and the scrub oaks, so the big John Deere (with locking differential) was called out. I made about six runs with the dumper wagon half-full (because of the weight), and there’s always more to do but at least it’s a start. 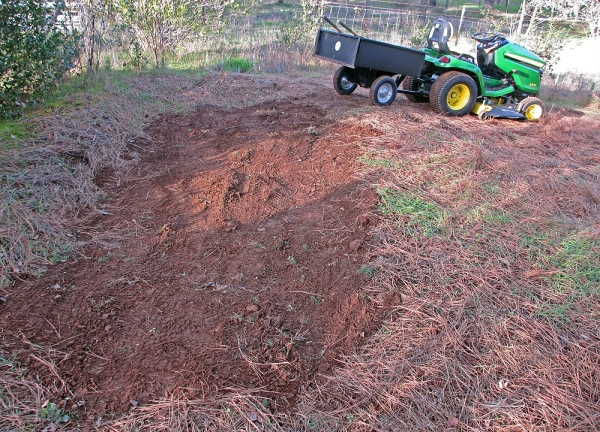 You can’t really see the wide ditch from the picture because of the combination of angles, hillside, and lighting, but it’s about as wide as the fresh dirt and rocks. Six half-loads was a pretty good job, but it’s all soft and there is room for more.
Rain possible today at 3:30, so maybe a bit more work is in order while I have the cool pleasure of an overcast day.
UPDATE: Got outside where the temperature has already peaked at 51 and dropping as the storm comes in bearing Sierra snow. I bent over to move some rocks by the fence and my back called-up to remind me of my current age and decrepitude. Between shoveling and bouncing around on the John Deere yesterday I probably should have worm my motocross kidney belt, but it doesn’t match the yellow and green color scheme. Anyhow there will be more time for more stuff after the rain blows through. 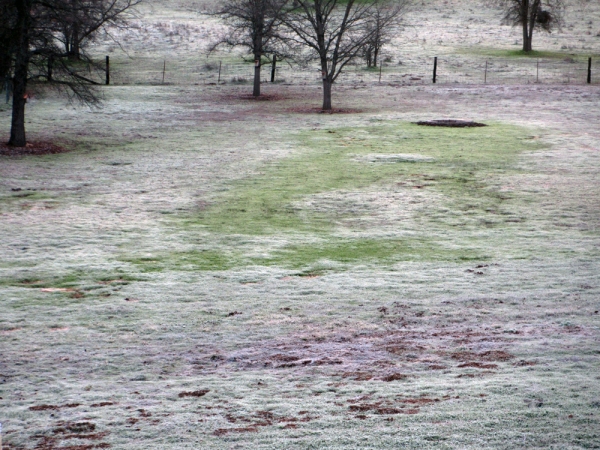 After the morning frost dissipated and the sun rose up high enough to make a good temperature difference – which was around 10:00AM – I put on my muck-boots and advanced into the wet pasture to begin channel-making.
At first I was just going to spray weed-killer on the Broadleaf Dock, the nasty-soupy carrot-rooted plant that infests and traps brackish water, then sends up a stalk of ten-thousand seeds to propagate itself – the stuff of which I had pulled-up over fifty bags last year. Meh.

The small channel that I had gouged with my boot-heel before the last rain was moving water off the field rather well, so I decided to go back and get the shovel and do some drainage improvements. Also the pre-emergent that I spread in the Fall combined with Scott’s turf-builder “Weed and Feed” meant that I had a lot of actual grass growing instead of just prairie-crap like the Dock (and Thistles and Sedge). Now I had/have an opportunity to cut out whole rooted grass chunks and build-up low-lying areas, so I began that too over by the fence line, carrying shovels-full of grass that dripped shovels-full of water at the same time.

Large patches are still pretty squishy where still-water is standing, and there is much more to do – but on a fine and mild day like this I had to make mud while the sun shined! Rain is forecast for tonight and part of tomorrow, then Tuesday is supposed to be clear before another storm blows in Wednesday.

Three inches of rain and still counting (UPDATE: 4.13 inches for January), but clearing tonight and less tomorrow and the rest of the week.
The run-off from my neighbor’s pond (off to the right) is now flowing into the catchment and through the 8-inch underground pipe, and out into the stream-culvert on the left with good momentum. The rest of what is visible is simply run-off coming downhill into the pasture.
Life in the Country out in the sticks. Maybe I should get a row-boat.

Cold in the high 20’s this morning and the lined Carhartt jeans are doing a good job – while some early snow sustains the Sierras, what moisture exists here on the Western Slope is only as frost on the ground. December has been an unusually dry month.