Since it’s vastly cooler now and still very dry, I decided to take a look at the shambles on the fence-line where my neighbor’s pond-overflow meets my field. Somebody at sometime – over ten years ago – had created some kind of catch-basin, and it had fallen into disrepair. A semi-circle of terrace block is stacked-up around a pile of river-rocks, with a pathetic layer of dirty old landscape fabric stretched across in an attempt to keep out debris. The corners and edges of a blue tarp peek-out from beneath the terrace block, evidence of some kind of “pool liner” to contain the water in the basin. I called it “the Hydraulic Impediment,” because it didn’t seem as useful as it portended, while jutting into the path of the mower.

During last year’s exceptional rain the overflow was pumping madly and water was going everywhere, so its utility was in question, and now that it was dry as a bone I was curious as to what the hell was going on under that pile of rocks and dirt and crap. Also I figured there woulds be no watery muck to contend with, or critters – and I need the exercise.
So I moved the terrace-blocks aside and laid out a tarp, and we set to tossing the big rocks into a pile on the tarp while loading a bucket with the small rocks and creating another pile. I want to put the small rocks back on top of the big ones to help act as a natural filter instead of using yard-cloth as a screen.

All the dirt and debris on the ground-cloth got rolled up and piled off to another side, and it wasn’t long before we uncovered the big old 8-inch drain-end that was blocked by the tarp and some large rocks. Hmmm…this must lead to the big steel pipe that runs beneath the whole field and drains out into the creek where the cattle water. The big tarp covering the face of the drain must not have worked so well and the little Y-cleanout would not be enough as a top-flow drain. 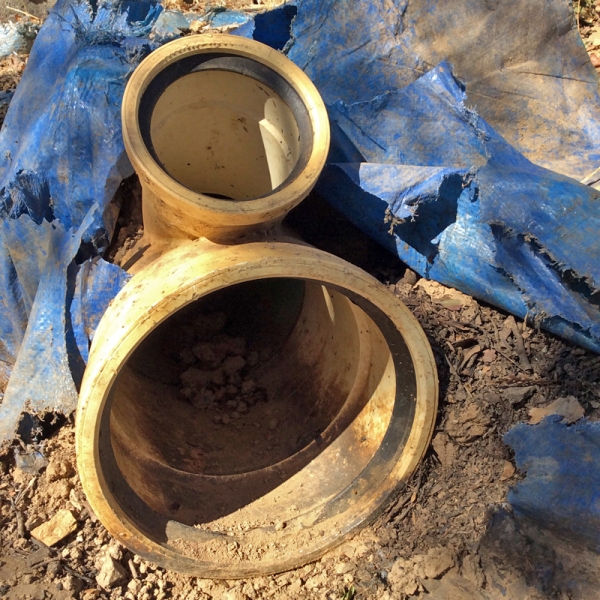 There is a fresh tarp to replace the torn and tatty one as a pool-liner – this time brown. Also I decided I wanted an extension into the catch-basin that would better collect water and yet (hopefully) prevent debris once the water percolates down through the large stones. Home Depot doesn’t have anything pipe-wise that is this big (but they did have a little 4-inch slotted cover for the cleanout), so I went looking with the big-boy suppliers.

Ferguson had nothing less than 20-feet and the Fruit-growers Association didn’t have anything this big in diameter, but at another place (where they only had 20-foot sections) I got lucky because an older gent was returning some grates and covers from a job, and I took a look at the square cover and it measured out OK. I figured I could re-purpose the square plastic lid ($40) using safety wire of something.

So back to to my local irrigation and landscape materials company for a 10-foot (minimum-length) section of 8-inch drain-pipe – corrugated on the outside but smooth on the inside ($27). I got out the Sawzall and made a 5-foot section, spray-painted gold on one side so I would know which side went up and besides, this IS “Gold Country” after all!

To perforate the bottom I drilled five rows of 3/8″ holes down the length in each “rib” – 300 in all, and then in between the ribs four more rows of 1/4″ holes so another 240 holes…and only once had to change the drill battery.
I may need to anchor-down the extension so it won’t float! Might tie some wire around a couple of the big river-rocks to act as weights on either side of the tube. Still have a bunch of digging-out to make a channel for this extension thing… Exercise!

5 thoughts on “Fieldwork: the drain”