The shed doors face …UPDATE MY DIRECTIONAL DYSLEXIA: DUE-EAST…and I needed a way to mount the solar panel on an angle to catch the sun, so I put a 4″x4″ post in the vise to start the mock-up of my corner mount. At Ace hardware I found the 12-foot extension for the Deltran solar panel lede, and a couple t-hinges with about a four-inch leg. 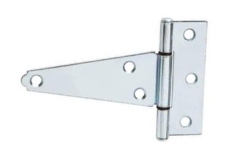 On the 4×4 post I attached the two hinges on opposing faces, on a 45-angle. At Tru-Value I found some 2-1/2″ eye bolts the proper small-ish diameter thread to fit through the corner holes of the 14″x16″ panel, and got a couple feet of light chain. Then I took a four-link section of chain and ran it through the eye-bolts and the ends of the hinges. Voila!

Next up it needed a brace for the back so the panel laid-out out at the right angle to get the solar waves and rays, so I put a piece of 2″x4″ in the vise, set the saw at a 45-degree angle, and made two cuts so the brace would fit on the corner.
A third cut was made for the angle of attack, which was too shallow at first and had to be re-cut for a steeper angle.

I pre-drilled a couple holes in the 2×4 brace for deck-screws, to make the corner attachment tight to the siding, then ran them in short to mark the hole-locations. It was kinda fiddly to make the final tight-fit without first pre-drilling, because the brace wanted to move around a bit and being on a corner it pushed one way then the other.

I ran the lede up around the brace to the door side, and from the inside-out drilled a 1/2″ hole through a shed 2″x4″ cross-member, to the the hole up-high under the eave. Running the lede through the hole and along the upper interior sill-plate, I screwed-down wire anchors every few feet and dropped it onto the mower location and hooked-up the charger. To finish it off I gooberd a bunch of siliconized plumber’s caulk into the hole to keep the weather and bugs out of the hole.
Now listening to the pitter-pat of rain on the gutters, I’m glad I got ‘er done.