My embankment workers returned to give the second plum-tree-on-the-driveway a haircut to match the crew-cut on the other side — also to thin both trees so they wouldn’t be so overgrown inside and let some light in. After cutting, the guys piled-up the “hair” on the gravelly slope in a huge bunch and it was rained-on for three days straight – and today we attacked it.

In the meantime Shasta Dam/Lake up north (the reservoir with the greatest capacity) has risen over 15-feet! and to 81% of full – with all the wet Global Warming that’s falling from the skies. That’s HUGE!
I dropped the F-150’s tailgate and attached the bed-extender gate, threw a tarp down into the bed, and we began the process of reducing the pile for transportation. Chop-chop-chop.
Whenever the fluffy stuff got too tall, I got into the back of the truck and chopped some more. A number of larger branches were deemed fit for the burn pile once dried so nipped and loped and chopped the smaller branches and hauled-out those big ones into another pile. 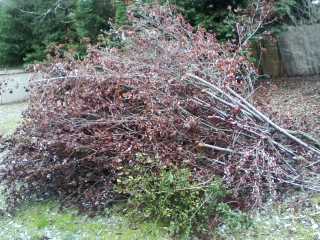 We began in the early morning right after coffee and a banana, while dew covered the branches and the truck’s windows were glazed over with mist and moisture, and ended around 11:00 with a fully loaded back-bed, covered with a tarp as per the CHP transportation rules ($500 fine otherwise) and set off to the dump, er…”transfer station.”
Cost of trip was $12. 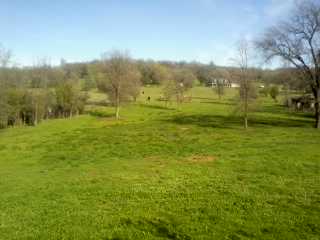 After a nice lunch while the cows grazed in the far pasture, we returned to assay the cleaned-up embankment, and decide where to plant the bright orange flowering quince shrub-hedge — and I raked up enough extra hillside junk and blackberry bramble to fill the yard-wast bin for next week’s pickup. Good cardio.

7 thoughts on “Haircut: loping and chopping”