The 20-yard box arrived yesterday at 4:00pm and I thrrw the scary bird-witch houses into it. In the hours before the skip arrived I was raking leaves from beneath the row of young redwoods and making discoveries. 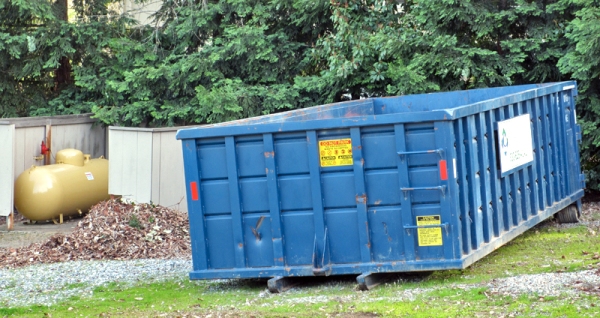 The row of trees still had their wooden upright “stand-posts” next to them, those upright poles that are put beside a young tree to help ensure it grows up straight and not leaning or at angle – and one was still attached.
Also behind the propane tank was a green mystery-wire and the remnants of an earl/old drip-line system to the trees 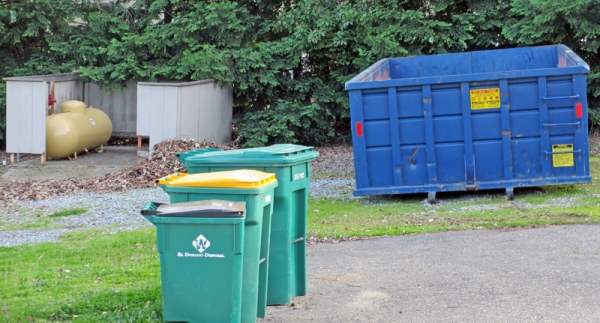 A local entrepreneurial kid has been hired to clean up the brambles and overgrowth on the West hillside, about 150-feet long, including a couple of trees that need trimming-back and a tree-sized growth of blackberry-bramble that needs cutting-out.
But we have rain expected Thursday, about an inch. Should get interesting.
UPDATE:
I bought a 16-inch flat screwdriver at Home Depot to help in removing blackberry brambles. They seem to repeat after touchdown, and are skin-nasty, so I put on some elbow-length goatskin gloves used for pruning rosebushes and was able to attack and uproot (as much as possible) six of the bastards.
Along the way I found a broken drip-line. It looks like the possible source of my water-puddling/flooding in the fall. The automatic drip-line valves have been turned-off since Fall due to the inundation of El Niño rainfall, saving me Irrigation District water-cost a plenty.
Also a root about the size of my forearm I believe emanating from the huge old “butterfly bush” up on the embankment that appears to go down deep into the “water-trough” runoff area. With a root that enormous I think it’s safe to prune the living crap out of that gnarly beast and still not threaten kill it.