My old buddy who’s escaped the wretched BayAryans and moved-in up The Hill, came down Friday morning with a set of 1″ Warne scope mounts. 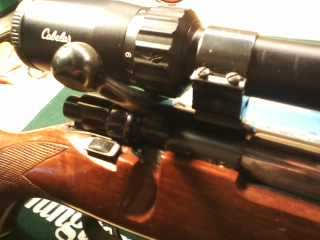 The problem being that, with the original low-low Weaver mounts on the Interarms Mark-X, the new (and bigger objective) Cabela’s .243 caliber-specific 3-12×40 scope had an interference problem (see right): the bolt handle would not rise and clear the much larger ocular ring. 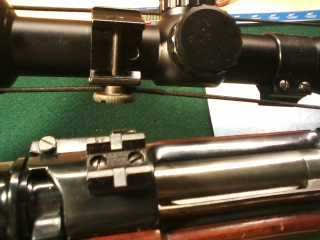 So we set-to swapping the old low rings for taller ones with all the new gimmicks like torx head screws – and used a nifty $100 inch-pound German torque-driver of Pete’s that he uses on his air-rifle scopes, etc.   It measured 26lbs for the new torx-head screws to prevent tube-crushing.

After that and a bit of work with my vise on his AR flash-hider/muzzle-brake, we went to the Range.

Problem Repeated: Now I really  want to replace all my odd-sized and non-matching scope-screws with identical-sized torx head ones for uniformity. It doesn’t make any damn sense that so many AR fittings and scope-parts ALL have DIFFERENT size allen-head screws.

The Q/A asks, “Cabelas’ name is on the box but who is the manufacturer?” and the Standard Marketing Genius CabelasExpert064 Non_Answer goes: “Blah-blah…item number IK-714190, is made by a private label vendor exclusively for Cabela’s.” Yeh right, whatever. Another un-refuted but also un-verified answer from: State: Georgia, Age: 56-65, Gender: Male goes: “Meopta.” Looking on-line, another report suggests they are made by Burris. The box says “Made in China” – so maybe it is Burris.

After getting settled-in at the benches, during a cease-fire we set-up a target out at 100-yards and I proceeded to waste a bunch of shots trying to get on paper.
High-left, high-left, still high left. I ran the elevation click-arrows down until it stopped after just a few. WTF? The scope had run out of adjustment. Ok…let’s find the actual, physical center of this rig.
I undid the caps and we ran the Elevation erector click-click-click UP to the stopping point, counting all the clicks – fortunately it was easy because there was a nice witness mark on the tube and the clicks were indexed in five-click major increment hash marks. Then we ran it DOWN to the bottom and divided by half. Ostensibly that should be the vertical center. What happened is/was that the up-down/left-right arrows didn’t seem to correspond to the actual direction of reticle movement, at first.
So Then we went RIGHT with the lefty-righty rack-and-pinion projector (or whatever the hell you call it) to the stopping point counting all the clicks – and ran it back again to the LEFT and divided that number in half to approximate center. We went back and forth and up and down – and still were off.
Finally a wiser old head suggested we bore-sight it, so I pulled the bolt to have a look. With an easily identified target on the 50-yd line (lotta orange dots), glancing above at the scope we could clearly see that the scope’s sight-center was way-off, low and to the right. By now we had a helper in this effort and a few other commentators willing to add insight.
With the rifle held bore-on, we began moving the reticle to center – then after getting on-center the clicky-arrows magically began to operate in the correct arrow-indicating directions…
Hmm… First shot was nice (visible at least and close), but high and left, then the next was nice and on-center but still left, then move it over a bit to the right and X-marks the spot! After (FINALLY!) verifying zero at 50, I leaned over to shoot at the 100-yard target and couldn’t see my first shot. I could see my next shot because it split the 100-yard X. Time to put up a fresh target because things were getting confusing. 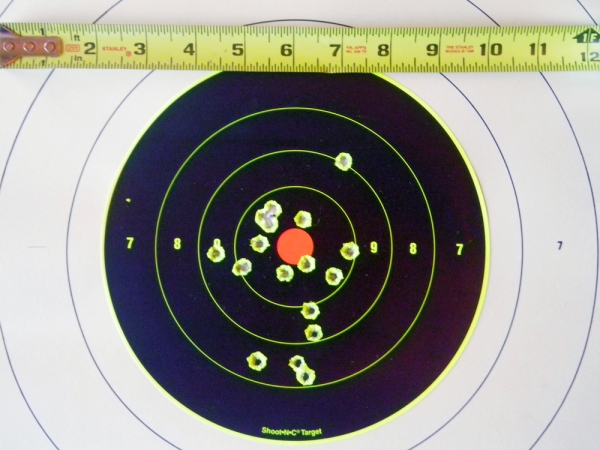 When I went up to slap-on a shoot-n-see target, I noticed that my first shot had split the “10” – which had made it hard to see. After that it was just fun banging away, and varying the magnification didn’t seem to move the shot that much.
It’s maybe a 2-minute rifle at worst, but I seemed to get good three-shot groups with two touching, so I think it’s a one-minute gun – but either way that’s plenty for deer and it shoots nice.
Initially I was excited to think the scope was a re-branded Meopta, or Burris – but the weirdness with the turrets and backwards adjustments makes the “Made in China” lable on the box more prominent in my mind. At any rate it it bright and clear and sharp and fog-proof and things that won’t f*k up a hunt or mess-up the shot on a deer, except by me myself.
Incidentally I’ve been shooting Wally-World Winchester Super-X 100-grain Power-Point ammo, nothing special – should I change it? It seems to go to the target well enough.