Airport Overlook-Beach House has been undergoing some upgrades, and on the exterior She had decided the stupid pink plum blocking the view had to go – so yesterday it went. Today Bernard-Built-Like-an-Oak-Tree came out to grind the stump, which lead to some interesting developments. Sometimes you can’t see the forest for the trees or the land for the rocks.
As Bernard skillfully maneuvered the very-very heavy, tracked, self-powered, land-vehicle stump-grinder (did I say tracked?) work it’s way across the rocks — and the pathway, and the rocks, and the terrain, and the rocks and tanbark, and finally to the cliff-side stump-site, we watched from above.
We made some topographical observations. We could do this: we could unify some of the terraces if we moved some big rocks. This is gonna be fun. My fingers will pay but it will be fun.
In other news The Railing By Burt went in last week. It took about a year, but the design and execution was a bit fussy, especially with the raw and hard-as-rock acacia, and that takes time. Can’t rush it: 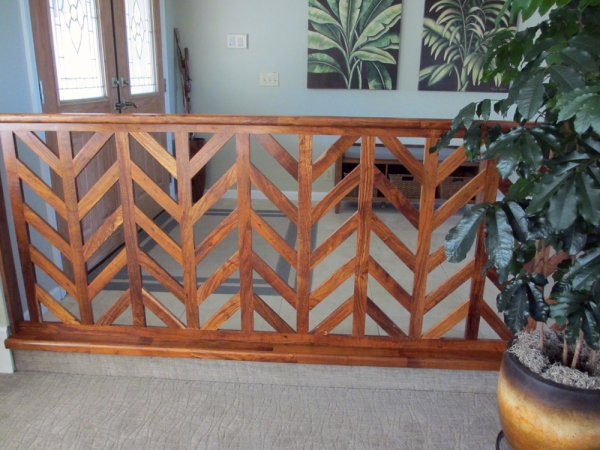 3 thoughts on “Advances on the Low Out Croppping”