Coming off Highway 49, the road where we once looked at buying a home (but were dissuaded due to remoteness), is for the most part a rutted-out, bumpy, one-lane dirt up-and-down-and-sideways cattle-track roller-coaster. It is/would-be a great XR dual-sport road, but not one I would venture two-up on the Gentleman’s Express without getting clouted upside the head by my passenger – or even solo a big GS down, really – not even too sure about a KLR, but maybe the Big KTM. I’m sure the locals love it and hate having any competition.
We only met a few cars traversing it, one of which was a big dually truck driven by a woman, with a large and long horse trailer that must have held six horses. She had some skill and experience obviously – that’s my kinda gal! Also my-kinda-gal was driving OUR truck while for once I sat shotgun and looked out at the scenery. It was an exercise in patience and closed-lips. “Look out for the muddy rut, dear.”
Eventually the dirt-gravel-and-ruts turned to pavement, and we passed the home we had speculated upon – and were glad that we had chosen differently.
Last summer’s Sand Fire that burnt a few vineyards and had a host of people (more than 1,000) evacuated, put paid to that decision, but today it was an eminently scenic drive through lovely green countryside.
Through Somerset we took a left on Perry Creek Road and went out to Windwalker Vineyards. We were met by a very pleasant and nicely conversational local woman named Kathy who poured up a tasting, and we sampled both the excellent whites and reds.
After a picnic lunch in the truck we continued on to another winery whose main gimmick seemed to be a series of caves dug and cemented into the hillside. I’m sure it’s quite an attraction in the hot-hot summer, but on a cool January day I believe the site and atmospherics did not serve the reds well – they would have benefited from much less chill and been able to express themselves and breathe better in a sunnier tasting room. As it was they were thin and short-flavored, not a chewy mouthful.
Maybe our taste-buds were already exhausted from the earlier excursion, but in any event we would up calling it a day and heading home about 2:00PM after four hours – almost an hour of which was slowly traversing the rutted track of lower Sand Ridge Road alone. I’m sure it would have been faster and more fun at speed on a bike with knobby tires, as long as injury and a helicopter ride-out was not required. Be careful out there kids! 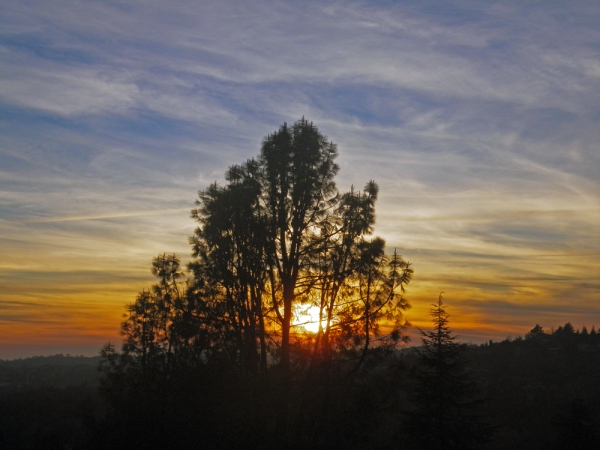