It’s not my carry gun since I’m not in a free-state, but an old 1909 Colt can do the job of stopping a violent person as well as a new one. Violence isn’t an existential abstract *thing* unto itself that floats around in the air like a cloud raining here and there and making some unfortunate people terribly unhappy.
It’s real and personal and committed by people with evil in their heart, not things. It only begets more if the begetter survives his begetting act – stop it in its tracks hard and it’s over. 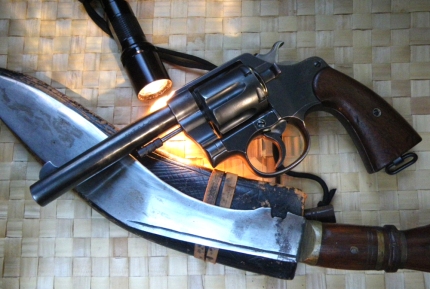 For every tragedy perpetrated by a lunatic, there are a thousand people who arm themselves and refuse to be made victims – in recognition of those people and in support of our innate human right to be armed, Forgotten Weapons is happy to join the Light a Candle to Stop Violence meme proposed by Weerd.

Whoops – had a weirdness with the post and Forgotton Weapons’ pic.

8 thoughts on “Light A Candle To Stop Violence”