It would be nice to get this information from the manufacturer’s own product description instead of another site, but I guess that’s why we have the Internet. I don’t know if these guys have filled out the requisite forms to be classified as an “Authorized Sig Dealer” since they’re just some Interwebz site selling “factory replacement grip panels.”
At less than half the price from Sig and the same cost with shipping as the ones on eBay, I should be suspicious and require hand-holding by an Authorized Sig Dealer since my own experience is deemed inadequate to determine the optimal requirements of a Porsche oil-change – in any language.
But this is the second data-point I’ve gotten for the following information as opposed to one single experience, weighted by opinion:

And I’ve got a 20-year old Sig/Porsche – time wounds endlessly, and so too the viper tongue of youth – and it inflicts engineering changes besides. However since I’m a highly skkilleted professional despite having not even Uno job, let alone Zwei, I believe there is a way to deal with the too-long screws and the 0.055″ offset.

In the first case the thickness can be reduced by half – that’s your 0.055″ there. 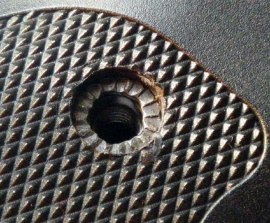 In the second you can see in my old grips what appears to be a toothed or serrated lock-washer (epoxy actually, nonm-removable). They/it occupies a portion of the depth-cut for the screw-heads, since you don’t want the heads seated below flush anyhow because then they become crud-collectors, and prevents the screws from seating too deeply, as in the deep-cut holes of the “slim grips.” (bottom pic)
I believe this would allow the backside of the grips to form together in a seamless joint. It’s the mainspring seat at the bottom that pushes the panels apart. Forcing them together only produces the wedgie-joint.

The problem remains that the grip is the primary and first interface with the gun, and its integrity should not be compromised – which might happen here, but since I have already begun to saw away at the tensile fabric of the grip and cannot return them, I might as well carry on…