No wonder I woke-up nauseous and with a headache – it’s must be my psychic-hotline calling-in. 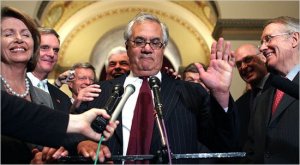 When you see these guys doing this, these nasty Clowns – it’s time to raise the black flag…

“Fannie Mae understood the rules and simply chose not to follow them, if Fannie Mae had followed the, the practices, there wouldn’t have been a bonus that year.”

I think the worst thing about this bailout plan is it makes it nearly impossible to argue for free market solutions to problems going forward. Regardless of how much of the $700 Billion is actually spent or recouped, it will be thrown in the faces of people who say, ‘let the markets work’.

UPDATE (from my friend The Conservative UAW Guy):

Looking in at the party of elites through the farmhouse window, the common animals can no longer tell which are the pigs and which are the human beings.
George Orwell – Animal Farm

4 thoughts on “We are Doomed – to Socialism and to Hell”